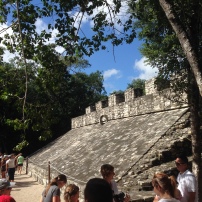 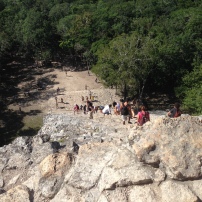 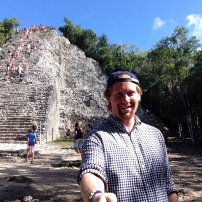 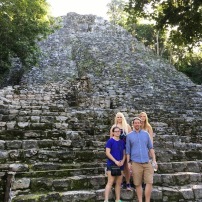 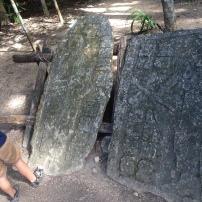 Top, from left: Recovered Mesoamerican ballgame court; Coba ruins from peak; Coba, viewed from ground. Bottom: A selfie; a family portrait- typical tourist stuff; Mayan glyph script, the only fully-developed pre-Columbian writing system in the Americas, of particular interest to me on the trip.

“The captain of the winning team,” Germán says, “earned the honor of being sacrificed to the gods.”  We stop in our tracks in the hot dirt.  Sweat cascades down our foreheads as we turn toward the guide, a young man who quit his office job and abandoned his college degree to spend six days a week guiding tourists through thousand year old Mayan ruins.  “Some reward, eh?”

An uneasy laugh emanates through our little group of American and European travelers.  The idea is entirely foreign to us; we’re more intrigued than repulsed.  The traditional game still practiced ceremonially by the Maya involves a ball of rubber, elbows and lots of patience.  And intensity.  And luck.

“Be back at the van at 11:45, and we’ll get on the road for our next stop: zip lining,” Germán says. We scatter.  Dad and Nancy step over to sit on an overturned log for a sip of water.  Andrea holds up her phone and takes a picture. I pull out my selfie stick, attracting a few stares, and snap a picture.  I fix my sleeves and hook the stick through my belt  buckle.

“Well, shall we?” I say to my sisters.  They nod and begin walking toward the pyramid.  Earlier, Germán had told us the Mayan added another layer to the outside of many of their temples every 52 years- symbolically and literally,  a new generation added to the works of the previous ones.

The walkway is steeper than we’d anticipated.  The hard limestone is cool on our hands, the aisle overrun with people of all sorts scurrying to the top. 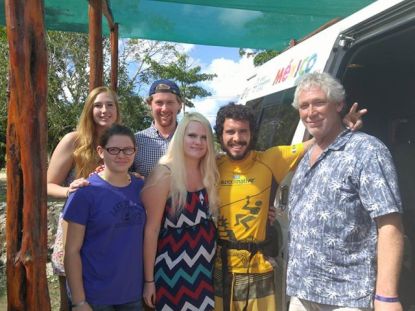 The Richter family with their guide, Germán.

A few hundred steps later we reach the temple’s peak.  Various alters and rock formations dot the landscape that otherwise consists only of trees and a long powerline that stretches across the distant forest.  No roads are visible, no buildings, no airplanes in the sky. We sit and ponder the view, new impressions turning around our heads.  Think of what’s been done here, the history, the heritage we’re witnessing, the transformation of one culture to another and another.

Germán has spent years studying the ancient Mayans and is able to answer all of the questions we ask him, including his own well-informed personal critiques of popular conceptions of the ancients of his homeland that he feels an overwhelming affinity with. I ask him about the writing system developed by the Maya, a particular interest of mine that I’d read up on before the trip. We take full advantage of his knowledge, asking the funny questions, the clichéd ones, the slightly uncomfortable ones. There is a true desire to learn and to share.

It is my first time outside of the United States.

We look down at the limestone and think of the morning’s experiences.  Then we crawl back down on our butts, one step at a time, sea turtles, saltwater and sand ahead of us.

One thought on “Coba Ruins”