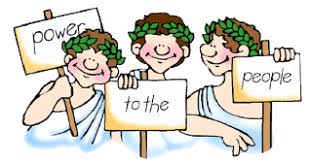 The scene is a familiar one. A student knocks reluctantly on my office door, enters the musty room with uncertainty and then proceeds to speak some deeply heartfelt words in a trembling, quivering voice. Something along the lines of “I do not feel comfortable with other people viewing the writing I produce for this class.”

As any competent composition instructor knows, teaching should always be approached as a research activity, especially for those teaching courses with a social activism purpose in mind. By this logic, then, teaching can be equated to method as democracy might be to purpose or/and hypothesis. Extending this metaphor, a few more analogies can be outlined: the correspondence of results to rhetorical discourse, of outcome to participation, of inventive event to active engagement and conversation.

With this is mind, I’ve always oriented my FYC classes around a few basic principles that change very little between individual semesters. One of those principles is one that’s come into question over the past few days: my firm belief that students not only benefit from the authentic rhetorical situations brought about by public writing, but that composition never fulfills its higher purposes more than when students actively participate in public, community and civic forums. Breaking down walls between the university and the world at large is one of the chief ways in which we equip our students to interact with ideology, ethics and politics, and it’s an excellent way to teach writing. As Ellen Cushman argued all the way back in her 1996 article “The Rhetorician As an Agent of Social Change,” composition instructors haven’t historically been wholly effective “acting within the role of the teacher” as perpetuated by their institutions and by academic culture, and thus have been prevented from the crucial task of segueing university knowledge, labor and agency into public spaces. Community literacy initiatives, especially those formed in collaboration with community partner organizations, tend to require time, connections and resources unavailable to many composition instructors, and therefore are not always an adequate solution to this problem. It is here that social web spaces enter the conversation as one possible answer.

A personal note– it has always been my belief (and I share this with many others) that social web technologies, spaces and interfaces are not only a chiefly-valuable space for which students can learn to understand and critique their own rhetorical practices, but also that they have unique potential to equip students with a rhetorical agency that endows them with the tools needed for responsible digital citizenship, no idea to shrug at in the 21st century. They are, in short, a vehicle in which ethics, politics and ideology are enacted. As a learning tool in FYC, social web pedagogy is an apparatus from which to launch investigations into audience, ethos, style, purpose, genre, argument, method. The social web functions as an avenue into wider conversations students are already a participating partner in.

We’re long past the turn toward the social in our discipline, from a process-writing orientation concerned primarily with invention, drafting, editing, revision and finality, and we’ve instead transitioned toward a more authentic, public, community-based collective prioritization toward considerations of response to real rhetorical situations. Following the vein of Tony Scott’s Dangerous Writing: Understanding the Political Economy of Composition and Nancy Welch’s Living Room: Teaching Public Writing in a Privatized World, the discipline in recent years has moved even more toward activities that “challenge a flawed social order” as part of a third wave within the social turn (Clifford and Ervin). My own research has paralleled this shift, as parts of my master’s thesis concern themselves with digital citizenship in public online spaces. It’s this digital citizenship question– what is it? how is it constructed? how is it impacted by ideology and political/social inequalities?– that drives my current thread of thought: how might FYC classrooms train digital citizens?

Perhaps an obvious caveat, but an important one nonetheless: a question such as this one has the potential to encompass an entire dissertation or similar book-length project. There’s not room in a single blog post. I’ll augment this post with additional discussion in the future, I’m sure, but in this space I have room to address only one or two possible avenues of thought. More will follow.

I’ve been reading a lot on community literacy projects recently– people like Cushman, Linda Flower, Eli Goldblatt and Steve Parks– all of whom question the role composition has to play in functioning, progressive democracies. For this group of writers, public writing is privileged because of its ability to connect students within the university with citizens, residents, workers, tenants, tradespersons and other actors that they’d be unlikely to form dialogue with in any other space. Flower is most productive when approaching these ideas, arguing that it is no longer enough to simply “speak up and against something,” but that we must also “learn to speak with others” across notions of difference (81). To Flower, learning to speak for something is as much a critical component of a liberal literacy education as learning to analyze, react and resist.

How can we craft authentic rhetorical situations without engaging the expensive and oftentimes limiting institutional bureaucracies associated with community partnerships? Can composition teacher-scholars autonomously design public rhetorical situations that engage community alliances, fascinate open-ended discourse possibilities and immerse students in productive exercise of democratic citizenship? They can, and they should, and it is my contention that social media spaces are a prime rhetorical zone in which to do so.

One of the more persuasive accounts of this course of action is outlined by Scott Sundvall and Katherine Fredlund in their recent Composition Forum contribution “The Writing on the Wall: Activist Rhetorics, Public Writing, and Responsible Pedagogy.” Sundvall and Fredlund introduce separate public writing initiatives launched in their respective writing courses, both of which enlist what they term “responsible pedagogy” to empower students to work toward tasks of written activism, democratic exercise and community engagement through writing. Both initiatives confront conflicts introduced by the classroom emphasis on activism, though only one utilizes social media to perform these activities. Sundvall and Fredlund introduce the Greek concept of paidea, meaning training for citizenship, as a fundamental higher goal for their classroom procedure. My own past teaching activities converge with the social media project Sundvall outlines, as, like his website and hashtag-creation project, my students constructed and wrote an explicitly-activist web publication Sparking Change, our attempt to argue for social changes and to answer the question of how to best to begin these community movements.

As Fredlund and Sundvall state, “we do not write history: we teach only how to participate in it” (2). Alongside Flower’s call for alliance and unity, the goal for Sundvall and Fredlund is not to teach students excellence in expression, citizenship and rhetorical dexterity, but rather to discover, to re-invent, to pioneer, and to do so with a nod toward the probing of what it means to engage the polis responsibly. They consider how we might equip our acting rhetors to do so more effectively, conceiving composition and even rhetoric itself as instruction in ethical, political and ideological application.

Re-conceiving writing courses toward aims of improving civic participation and discourse requires renewal of understanding regarding the inherent affordances of public writing and authentic rhetorical situations. Student rhetor-citizens rarely create spaces themselves inside of the classroom, but they often fill them (with language, media and video ) when provided a safe environment in which to do so. We are, after all, living in an age where Neil DeGrasse Tyson can state on an MSNBC segment that we’re witnessing the “unravelling of an informed democracy.” It’s past time composition courses began enacting a version of Cornell West’s call to “prophetic pragmatism,” the power and instrumentality to “have some potency and effect” to make a difference in the world. Teacher-citizens, long constrained by material forces and disciplinary limitations, might begin to pursue public writing on social media, students’ own turf, as a mechanism toward democracy.